Building Up Your Framework for Coaching

Here at the-Coaching Blog-run by Gerard O’Donovan, our aim is to constantly bring value to those seeking to improve their lives. Therefore we have a policy of publishing articles and materials by guest authors whom we value and appreciate. Today’s guest author is Risto M Koskinen (Finland).

A plethora of training programs for coaching offer you a quick-fix, one-size-fits-all approach, “qualifying” you in 1-2 days and entitling you a specialised [pick your choice] coach, often with a nice acronym to be added after your name. This is not to say these programs are not worth participating in, but to raise a question of when and for whom they are a real value-add – do you have the backbone to understand and incorporate a new approach or technique into your practice?

Coaching as a Profession

Coaching has been an undefined field of work, claiming the status of a profession, but missing some crucial characteristics of a profession. Grant and Cavanagh (2004, 14) have argued that coaching has been more of a service industry than a genuine coaching profession, amongst the other things because of the lack of a holistic theoretical framework based on a sound and sufficient empirical foundation and a shared body of general knowledge. An interesting perspective towards this issue opens in Hamlin, Ellinger and Beattie’s (2009) conceptualisations and definitions of coaching, OD, and HRD: their findings suggest that all three fields are very similar in terms of their practices, intended purposes, and processes. This further poses a challenge to define a genuine coaching profession with its own identity and unique body of empirically tested knowledge which can be distinctly defined and delineated. Also, we as coaches come with various backgrounds, different levels of education, diverse mental frames, differing aspirations and personal interests, which opens up a multitude of approaches, frameworks, methods and tools.

My intention here is to point out two aspects. First, I believe that coaching as a service, craft, art, vocation or profession – whatever it is for us – is not simply “a technology followed by a formula” (Schein, 2003, 80), and we need a deeper understanding of our practice than just applying a more or less rigid template of practice. Surely, one can superficially learn a formula like GROW in a day or two, but to deeply understand the formula, its pros and cons, its scope of use, and its limitations, is completely another issue.

Second, I find it beneficial to draw a “road map” to describe the theoretical backbone of my practice. For a start, it helps me to see the whole picture, to ponder if the interrelated elements entwine a coherent, usable, and well-founded body of knowledge to be used as the bedrock of my practice. Next, it acts as a reference point when I look for further training to upgrade my specific expertise. And furthermore, from my clients’ viewpoint, it enhances the transparency of the premises of my coaching approach. Very seldom explicitly, but probably quite often implicitly, it also acts as a proof of academic competence in coaching.

Starting to Build the Backbone

My background is over 30 years in teaching, training, consultation and coaching, and my interest in career transition coaching developed first by mentoring my students in a polytechnic university in the early 1990’s, and later in implementing career guidance for some 15 years. Coaching, and especially career coaching, which later on refined to career transition coaching, became my mainstream around 2010. Interestingly, my process of starting to build up the coaching framework was very much parallel to what I had made with my clients for some 20 years!

The theoretical framework itself was not the first schema to start with, but an attempt to figure out a general direction or a marketable service product, in order “to start something new”. Personally, I felt quite fed-up with my by-then clientele, and craved for a new phase in my life. So, I started to ask myself, what do I know and what am I competent in? What could be a good add-on to my present know-how? What would I like to do for the next 10-15 years? Pretty simple questions, and as a visually oriented person, I started to draw a picture:

Picture 1. Starting With a Rough Draft 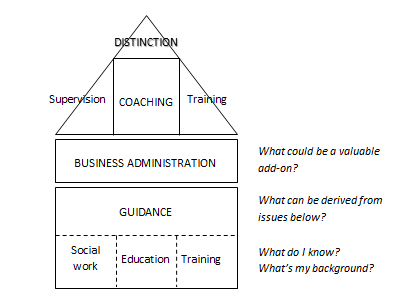 My previous experience had been widely in social work, education (teaching), and training. That was the basis to build upon, each block delivering own kind of professional expertise, which I deciphered in detail (like “being able to perform in front of a large group of people”). The central theme unfolding in this review was “guidance”, a concept that covered issues of teaching to consultation to training to supervision, even to teaching aikido (my “social contribution”).

Of course, at this phase you already have a preliminary understanding about what you are going to do. My idea was coaching. I had done my share of supervision and training, and I wanted to turn towards the business audience. Supervision is seen as a service for health care, social work, and education, having an emphasis on dealing with – especially emotional – work load. Coaching is seen more goal-oriented, and thus more suitable for the business context.

To get access to this new realm I felt I needed some formal education, and enrolled in an accredited MBA program, and got my degree a few years later, in 2013. In the pediment (picture 1) coaching is in the middle, supported by my experience in training and in supervision – the latter was also amplified by a university-based supervision training program in 2009-2010. Also a one-year coaching specific training in 2010 made me a Certified Progress Coach®. Thus, I was ready to provide coaching services, and having a pretty solid background for these services, too, except one missing piece: distinction or competitive edge. Up to this point the coaching I was ready to offer was just a commodity, with no distinctive theoretical framework, with no domain of specified expertise, and with no niche.

The next phase was to figure out the common denominator emerging most often and most widely in my professional experience, and that appeared to be some kind of professional, vocational or personal disruption. This was further on delimited to career transitions, which was actually the issue I had worked with for the last 20+ years, though never explicitly defined it as such.

Integrative thinking (Martin & Austen, 1999; Martin, 2007) and furthermore design thinking (Martin, 2009; Brown 2008) influenced vastly the way I built up my theoretical framework for career transition coaching. It was like solving a jigsaw puzzle: looking for the pieces I already had, contemplating their salience, weighing the causalities and compatibilities, and structuring a coherent architecture for my coaching practice. The whole process was really a back-and-forth issue, with some stumbling, but not too many false starts though. In my MBA thesis, I had been building my personal coaching methodology[1], a variant of appreciative coaching approach, and this was the starting point for the larger framework building. In picture 2 is described not only the framework, but in the left column also the structure this framework is based on:

[1] Appreciative Coaching® refers to this methodology which in Finnish is Arvostava coaching® and is a registered trademark for Navigen Ltd.

Defining myself as a career transition coach gives me a specific and still quite wide client niche, which is necessary in a small market (in Finland the whole population is 5,5, million; urban London in comparison is about double, 10,6 million). Career transitions occur when someone is promoted, changes organisation, starts a business, is outplaced, graduates, and so forth. Of course, these things happen to all of us, so further narrowing is needed. Not only due to my age, but also because of my continuing interest in models of (especially late) adult development and personal narratives I find myself being at best with clients in more mature career phases, searching for transformative career choices at their professional culmination points.

My purpose here has been to open up the process of developing my theoretical framework for coaching. This framework (and the way to build it) is by no means the only one right, but hopefully it gives you some inspiration to build up your own signature framework. Building it does not remove the premises of coaching as a profession (like entry requirements, formal academic education, regulation and sanction systems), but I feel it’s a shift towards a more grounded practice of coaching, thus gaining us some credibility, but most of all, deepening our understanding about the coaching service we provide, giving us a well-reasoned backbone.

Grant, AM & Cavanagh, MJ (2004) Toward a profession of coaching: Sixty-five years of progress and challenges for the future. International Journal of Evidence-based Coaching and Mentoring, 2(1), 1-16.

Martin, R (2009) The Design of Business: Why Design Thinking Is the Next Competitive Advantage. 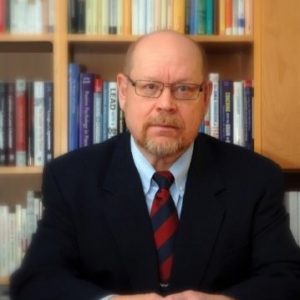 Risto M Koskinen, MBA, is a Finnish coach and supervisor, specialised in career transition coaching for key value providers. He is a Certified Progress Coach® and a Certified Supervisor®. You can contact him at risto@navigen.com 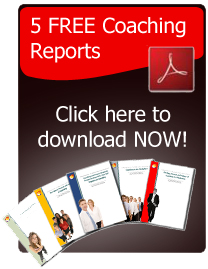