How to BE a Team Coach

Here at the-Coaching Blog-run by Gerard O’Donovan, our aim is to constantly bring value to those seeking to improve their lives. Therefore we have a policy of publishing articles and materials by guest authors whom we value and appreciate. Today’s guest author is Georgina Woudstra (UK).

One of the challenges for team coaches, is that the literature largely focuses on the team; why teams are important, what makes a team versus a group, conditions that set up a team for success and factors that contribute to team performance (and team dysfunction). It also focused on team development; the stages a team moves through to become high performing and the capabilities a team needs to master to perform. All really useful stuff, but none of it helps to understand how to be a team coach!

You assume that the core coaching competencies would equip you for coaching teams. They are great competencies, but team coaching is very different to individual coaching and it can be really challenging. In individual coaching, there is just you and your client and the system that the client is in. With team coaching you have your relationship with ‘the Team’ as well as with each individual team member, plus their relationships with each other and then the wider organisational context. It is complex and the pressures and underlying dynamics can be overwhelming. In one-to-one coaching, the client has chosen to work with a coach. In team coaching, team members might say they are up for team coaching, but is that for real or is that pleasing the boss, peer pressure, or groupthink?

The activities are all useful, however they are really team building and team development, perhaps delivered in a coaching style. Team coaching happens when we let go of these structures that provide control and we work with the team, live, in the moment around their own agenda.  After all, in one-to-one coaching, would you have it all planned out, or would you work more with what the client brings to a session? So why do we do this when coaching teams? There are a number of reasons, here are a few:

It is a brilliant book! It speaks to the heart of many of the issues so many of us have experienced in teams. But is building and delivering a pre-determined workshop really the best we have to offer as team coaches, or do we need to be bold and take more risks?

I have discovered in my own self-reflection and in training and supervising other team coaches, that the underlying truth is that we are actually using the ‘content’ to do team coaching in order to appease our own anxiety about working with teams, thus increasing our sense of control. The impact is rarely lasting or sustainable for two key reasons:

By following the piste, the pre-determined route, the team is processed through a series of steps, often missing or avoiding the underlying more complex and difficult dynamics which are found off-piste and out of sight.  This may well be good-enough work for the team’s initial forming, resulting in a new team charter and a greater understanding of team members preferences and, on a good day, a set of collective team goals and agreement on norms of behaviour. However, masterful team coaches have developed a set of skills that supports the team in going beyond team forming, enabling them to be with the unpredictable, uncertain, violative, ambiguous, political and high-pressure landscape that teams often inhabit.

So, what are the skills of team coaching mastery? 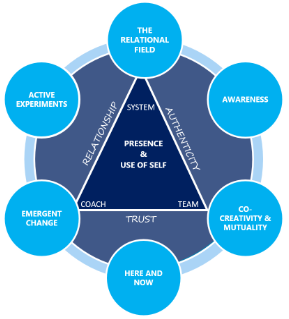 Presence and use of self

At the heart of being a team coach is presence and use of self. Presence is often misunderstood as charisma or style, rather presence emanates from your unique way of being in the world. Presence includes your life experience, your knowledge, your skills, strengths, weaknesses, vulnerabilities, values, beliefs, your physical embodied presence and your personal patterns of relating to others and the world. Use of self is about intentionally sharing your own experience while working with others. This is not the same as observing or mirroring back to clients, it is about noticing how you are being impacted by the team, in the moment and leveraging your presence to share this.

Relationships are the crucible for learning and change. By focusing on the ‘relational field’, the interactivity and interconnectivity within the team and between the team and the organisational system, we are working at the heart of where change is most often needed in teams. Working with the relational field invites you to take a holistic perspective, looking at the wider influences and patterns at play.

Masterful team coaches seek to build relationships with and between all parties in the team based on authenticity and trust. I often see coaches work with teams inviting members to be more open with each other, perhaps using tools like Johari’s Window to explore their more hidden or private selves on the basis that trust grows when we open up more to each other. It is a great tool, however, too often coaches forget to build their own relationship with the team by opening up their own window to reveal more of themselves. To me this is like asking team members to be naked whilst you, the coach, remains fully clothed – an unconscious strategy for retaining control perhaps!

Being a skilful team coach is not about adding more tools and techniques, it is about bringing greater awareness to everything you do as a coach.  A high level of self-awareness is critical for team coaches as this is the foundation of presence and the precursor to intentional use of self. Only with great self-awareness can coaches ‘stand in the fire’, holding the space for what is truly wanting to emerge to come to the surface.  Awareness-raising with teams is the primary catalyst for change and this is achieved through authentic dialogue.

Once coaches recognise their own need for control and begin to relax the habits they have formed to relieve their internal anxiety, they can begin to work with teams in a more relaxed and open way and in the spirit of mutuality. Coaches invite mutuality through co-creation, where the agenda is not pre-prepared, nor led, nor controlled by one person’s notion or agenda.

Team coaching can focus on coaching the gap between the team’s desired state and current state. However, making meaning, taking decisions, changing our minds, finding new solutions all happens in the here and now. By focusing on what is happening live, right now, in the coaching room, between team members and between the coach and the team, we can observe, experience and tap into the most significant opportunities for development.

Active experiments are a way for the team to create the change they are seeking in the here and now. Masterful team coaches devise active experiments spontaneously, as the need for change arises out of the dialogue occurring in the moment. Rather than being part of a pre-formed design, active experiments emerge naturally when the time is right. Encouraging teams to develop an experimental attitude and trying out new ways of thinking and behaving offer transformative experiences, which are often lasting and sustainable for the team.

By increasing your own presence and use of self you become the primary tool for team coaching, a tool that is unique to you and one that will make a lasting impact. This will give you an edge and that enables you to meet teams in their ever-changing landscapes. An edge that support teams in strengthening their aptitude for authentic dialogue, building greater resilience and capacity to apply their teamwork to what really matters most as the future unfolds.

About Georgina Woudstra, MCC is an executive coach specialising in coaching CEOs and Executive Teams. She has been described by clients as having “strong presence and credibility”, as being “experienced and wise” and a coach who “has extraordinary empathy” allowing her to be “challenging but gentle”.

She is also the Principal of the Executive Coach Studio, a coach training organisation for professional coaches looking to deepen their practice and develop greater congruence and coherence in their work.  Georgina is a successful entrepreneur in her own right. Co-author of ‘Coaching Global Top Teams’ in Leadership Coaching: Working with Leaders to Develop Elite Performance (Kogan Page), she is a thought leader and influencer in the coaching profession.